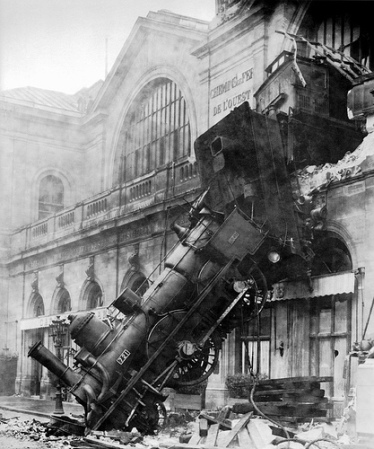 A well-known consultant* and I have been corresponding about the approaching train-wreck that is English schools’ generally panicked attempts to embrace VLEs ahead of the government deadline. He said:

It is certainly true that we could do that technically, and it’s certainly quite tempting to stick Chalkface’s snout in the VLE trough when there is so much money being misspent. But we won’t do it, primarily because I still think that SCORM is a giant step backwards for school-age education. Here’s why:

Take a look at a typical SCORM resource being flogged to work in your £10,000/year VLE. Nearly all of them are linear sequences of text to read and pictures to look at, perhaps leavened with a little bit of video. Opportunities to explore and discover are squished by ‘instructional design’.

As teacher, your VLE will show you that the student has started and finished the ‘learning resource’. It won’t tell you how much, if anything was actually learned. Nor if the student was engaged and enthralled or, more likely, turned even further off formal education by the whole ghastly experience.

Let’s consider an alternative. Web quests have been around for a decade now. Web quests guide the learner but do not over-prescribe. Web quests work beautifully with ePortfolios, and I certainly will be integrating them into Yacapaca this year.

Postscript: If you are wondering why SCORM is such a gross mismatch for school-age education, just look at its history.

SCORM is a specification of the Advanced Distributed Learning (ADL) Initiative, which comes out of the Office of the United States Secretary of Defense. Wikipedia

Yup, it’s a military training system. And soldiers, as we well know, aren’t paid to think. Contrast this with web quests, which are based solidly in student-centred pedagogy.

From which basis do you want to be teaching your students?

* I’d better not name him as he has to say nice things about VLEs to some of his clients.

This entry was posted in Commentary, Yacapaca. Bookmark the permalink.

One thought on “Do VLEs actually de-personalise learning?”